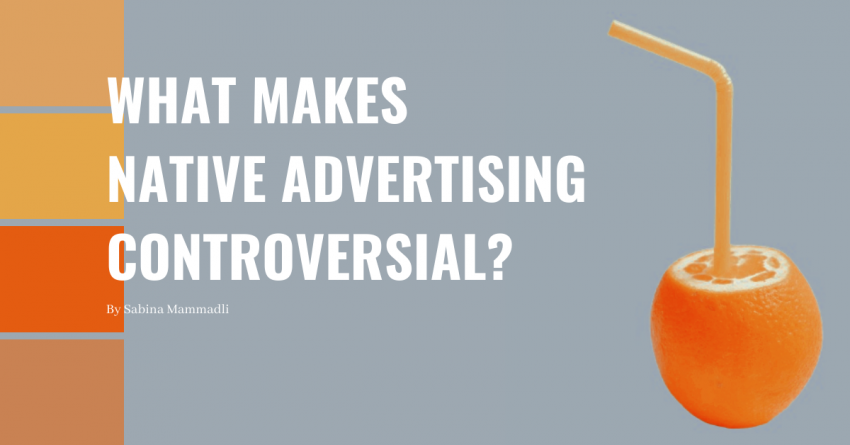 Maria Marteleur, Head of Native Advertising and Commercial Editor at Dagens Industri said: “If you know how to talk to the readers, you will sell more.”

The tone of words and the appearance of advertisements have always been significant factor in marketing. It is the very first step to communicate with customers and gain their trust. Especially in digital marketing, advertisements have become a connecting bridge between the company and the targeted audience. That made them the most important element to provide confidence in the product and service a company aims to supply.

For this reason, over years, various types of digital marketing strategies have developed to practice this aim. While some of them have managed to take effect, some of them have raised conflict – such as native ads.

Macmillian Dictionary describes native ad (ˌneɪtɪv ˈæd) as: an advertisement attached in a website or app to make it look like part of the site. Native ads match the visual design of the experience they live within and look and feel like natural content.

While imitating the content might appear pleasing to the audience’s eyes, it is also the reason native advertising is considered controversial.

Ten years ago, Fred Wilson mentioned this controversial advertisement method. However, did you know that it actually has been around for a long time?

To find out the odds and ends of native advertising and what makes it controversial, we’ll answer the following questions:

HOW LONG HAS NATIVE ADVERTISING BEEN AROUND?

The venture capitalist and the co-founder of Union Square Ventures, Fred Wilson originated native advertising as a term at the Online Media, Marketing, and Advertising Conference in 2011.

During his speech, Wilson used the term “native monetization”. He explained advertisements that offer a less disruptive and unique advertisement experience on a website.

However, even if Wilson was the first one to name the term, the pioneer shape of native advertising had been around for a long time, ever since the 1900s.

Advertisers and publishers interoperated to make consistent and effective content for paid advertisements in the 1910s.

Later on, in the 1930s, advertisers bought a radio, where they used pioneer native advertising methods. They advertised their products in soap operas – throughout serial radio drama shows.

In the 1940s, film producers began to use product placement, also known as embedded marketing. To promote brands, they placed products in the storyline and scenes concordantly. Until this day, advertisers use this method to promote brands.

Once the internet came along, however, Native Ads found themselves a new home. Especially on big platforms such as Google. Yet, it was only after 2007, once Facebook introduced pages that the era of social media marketing started to reach a wider audience.

Here are some examples of the early stages of native advertising:

WHAT ARE THE BENEFITS OF NATIVE ADVERTISING?

Founder of Copyblogger, Brain Clark has said: “Good native ads are content that’s about the reader, watcher, or listener. But ultimately there’s an actionable goal for the advertiser.”

Compared to other digital marketing types, advertisers favour Native Advertising. It naturally finds a way to the contents in the form of paid or sponsored posts. And they do that while putting publishers in control.

Furthermore, when done smartly, internet users do not even consider it as an advertising method.

So, what are the benefits of native ads?

Here are some of them:

While considering all of those, it only makes sense that native ads increase the purchase intent of consumers. Especially, when compared to display and banner ads.

Trust is the root of the business relationship between a consumer and a company. Therefore, a company needs to avoid deceptive native ads to not lose the consumer’s trust.

According to GlobalWebIndex, nearly 47% of internet users are using ad blockers to avoid an overwhelming amount of deceptive ads.

Due to a lack of trust, more than 54% of web users do not click on advertisement banners.

Native ads, on the other hand, have been controversial for internet users. They consider the content misleading to site users, who have mistaken the advertisement with the site’s content.

It is critically important for the consumer to understand the source of advertisement to judge its factuality. Yet, badly made native ads continue to confuse the source of the message. They damage the consumer’s trust and the brand’s integrity.

Here are some reasons that made the native advertisements controversial:

Native advertising had been a favoured topic of conflict over the years. Yet, it is undeniable that this marketing method has an indispensable place in the eyes of advertisers, publishers, and even consumers. It has been a bridge of communication for business throughout the years. And probably will continue to do so. At least until advisers find a way to clean controversial native ads or consumers find a way to block those ads.

You can be the one to find such a method and to do that, you can start your journey with the International Institute of Digital Marketing™.

Native advertising had been around for a long time in different shapes of marketing. It is one of the perfect marketing methods to show creativity. However, despite the positive approach, some people still name it controversial. My curiosity led me to do research about it and in this blog, I wanted to share with you what I found out about native advertising.